Welcome to Doughlings: Invasion's official Persona page. Here, you can find all the details about our beloved personas. 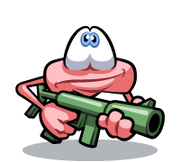 Game's standard hero. The name comes from the English word "Morph" because of Doughlings could morph something. 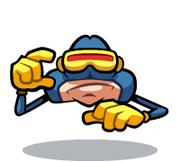 A death machine with laser beams!

Zap has it's own bullet type and could fire laser beams from its eyes to damage a column of enemies. Zap can't move when fire.

Activates Show Off called Optic Blast. This Show Off is a powerful form of Zap's standard attack and upgradable with Elixirs. 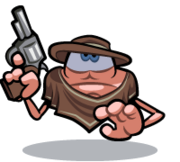 Activates Show Off called Bullet Time. Slows everything except Gunslinger's movement in a certain ratio and upgradable with Elixirs. 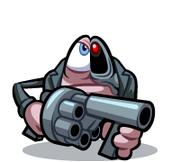 Destroyer starts suppressing fire with his trusty minigun and makes 1 damage to all targets. 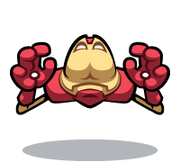 Armor has powerful beams that can be shot rapidly. That mean's there can be 2 beams at the same time. Shoot em'up baby!

Armor fires homing missiles to the 3 strongest unit in the battlefield and destroy them. (For power ranking: Enemies)